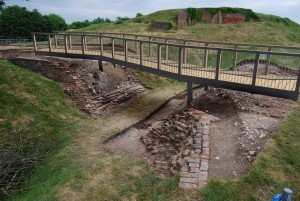 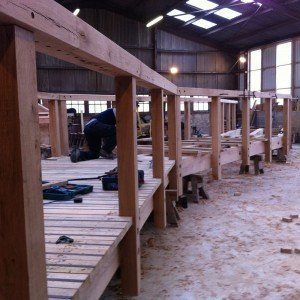 Basing House was a major Tudor Palace and Castle and once rivaled Hampton Court Palace in size and opulence. It is located in Old Basing, close to the River Loddon, and is now run as a visitor centre and museum by the Hampshire Cultural Trust. Today, only its foundations and earthworks remain, which are listed as a Scheduled Ancient Monument.  This project aimed to restore the original route across the castle moat, by creating a new footbridge for visitors that would link the castle to the house. The bridge was made to replicate a defensive device, in common use in the 16th Century. It zig zags back and forth in order to force aggressors to present the best possible target to the defenders of the castle. Unfortunately both the castle and original house were demolished by parliamentary troops during the civil war in what was one of the last great battles of the campaign.

The new oak bridge looks rather impressive and improves visitor access to the ‘citadel’ area with it’s Norman Castle remains (bailey and ringwork bank) and the remains of the Tudor House. It spans the western ditch of the Norman bailey, sailing over the excavated remains of the western gatehouse.

The project received £9,900 in 2011 towards the bridge and it has since been well received by visitors to the newly interpreted and developed attraction.